Two months before this trip to Europe I was on another trip to Europe and my traveling partners and I spent some time in Geneva. I saw enough on that trip to know that I wanted to go back at some point. Since I was going to me in the country anyway, I figured I could spend a day there and see a few things that I wasn’t able to on that trip. On that trip we spent a full day in Geneva on a Sunday and almost everything was closed. This time, I made sure to travel to the city on a Sunday and have my full day there be a Monday.

I left my hotel after breakfast and decided to head to the old city and visit St. Pierre Cathedral. I’m a sucker for old churches, or old things in general, and figured on this chilly winter day, that being inside as much as possible would be a good idea. How chilly was it? It was so chilly that someone on the second floor of a building was storing their produce on the window sill. 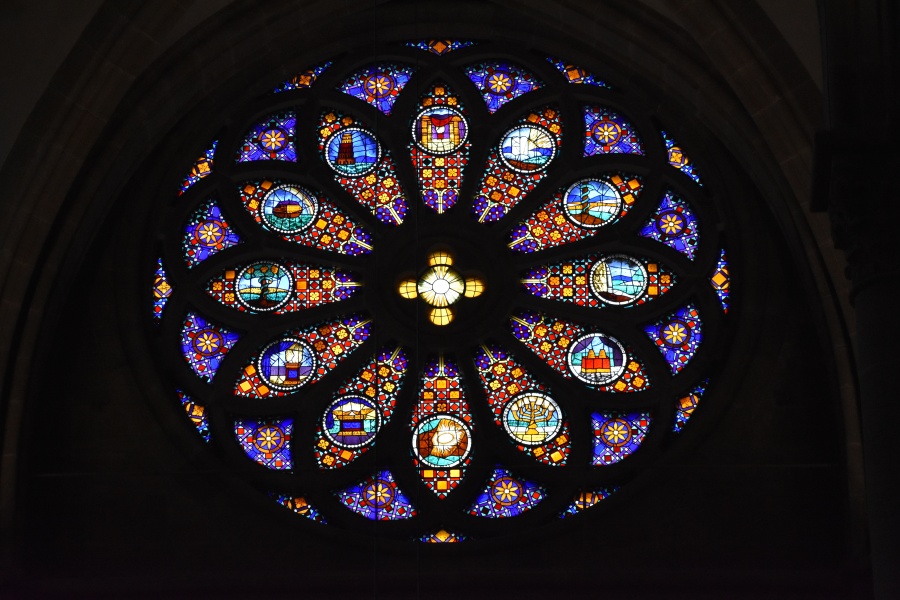 The inside of the cathedral was large and impressive and built in a mix of styles. It was historic due to John Calvin being here and during the Reformation in the 16th Century. I know very little about the Reformation and didn’t do any homework in advance so perhaps much was lost on me as I walked around it. There is a museum of the Reformation nearby, but I was more interested in what was below this building: Site Archéologique de la Cathédrale.

You go down some stairs and discovered beneath the cathedral during renovations were two earlier Christian cathedrals, parts of the old Roman city, and even burials from before the Romans showed up. It was really cool. They had an English audio guide and cool displays that helped you visualize what it was you were seeing and walking through. I love museums like this, they are a great reminder that you are the end result of thousands of years of civilization.

After touring the ruins under the cathedral, I decided to wander through the old city a bit to work my way down to a street I saw on a map my first trip. There was nothing really remarkable to me about the street except its name:

Since December 31st is my birthday, I figured that there were only so many chances I’ll get in my life to photo this street sign. I should have brought some tools and “liberated” it. Then again, while everything in Switzerland is top-notch, I didn’t want to gamble on their prisons following that trend. Maybe one will show up on eBay one day.

This awesomely named street came to an end (or maybe started, depending on which way you are going. Life is about 90% perspective, am I right?) right on the lake. What I have always thought of as Lake Geneva, is actually Lac Léman. Maybe it has two names, but since I’m in the French-speaking part of Switzerland (I also learned that Geneva was once in France), I feel like I can call it Lac Léman and not be too pretentious. Besides the very nice park along the lake, Lac Léman is famous for the Jet d’Eau.

Hey, they aren’t getting fancy with the name it just sounds fancy to Americans because it is in French; “Jet d’Eau” means “water jet”. It is as described, a giant fountain of water shooting up out of the lake. You can walk out towards it and I’m sure during the summer the mists from it are quite refreshing. Since I was here in January, I passed on the mists and admired it from afar.

It was while admiring the jet, that I noticed a great many water birds swimming around the docks. I saw quite a few birds I haven’t seen before but one stood out more than the others.

This little guy or girl with the blue/gray beak and great feathers. He was the only of his type among many more ducks, swans, and other larger swimming birds. Despite it being smaller than all the others, it didn’t seem to get pushed around like some of the others were by a few of the larger birds.

Imagine his size next to one of the swans there. It was really small.

The internet failed me once again and I was not able to identify what kind it was, so I came to the conclusion that it was a new species. Since I saw it on Jan. 8th which is both Elvis and David Bowie’s birthday, I named it the ElvisBowie duck. It is now my favorite bird, besides fried chicken. If you make it to Lac Léman, keep an eye out for it or any others like it. As far as I know, it is the only one.

I grabbed a water taxi to cross the lake to do some souvenir shopping, and hit a great food store where I grabbed some amazing cheese, cured meats, and Swiss wine for dinner. I must have eaten about five pounds of cheese in the days I spent in Switzerland and will not feel bad at all when I have my first heart attack. It was worth it.